Posted on January 2, 2013 by evamccollaum

January 1 as New Year’s Day strikes me as a clumsy and irrational arrangement.  How is the dead of winter a new beginning?  I suppose it’s a tolerable rehearsal for Lent without the problematic spiritual and theological overtones when resolve dissolves.  The fact that I spent most of my youth living miles (and miles) from anyone else who was celebrating has influenced my method of celebration.  I usually stay up until midnight and think about the years when my little brother Brian would run into the inky winter night and yell “HAPPY NEW YEAR” to the indifferent stars.

Worse than feeling left out by the celebrations we would see in grainy miniature on the TV, was the creeping misery over the approaching traditional New Year’s Day dish–black-eyed peas.  Thanksgiving has roasted turkey.  Christmas has rib roast, or Cornish game hens or even lobster Thermidor.  New Year’s has a bean that tastes like dirt.  Worse, you got one lousy day of good luck for every one of the things you ate.  My Grandma Jones used to pretend it was a month for every one, but she was just humoring her grand kids.

This year I decided to do things with a new attitude toward the tradition.  First, I made my mother’s favorite dish, and we watched TV until we heard the pop-pop-pop of happy little fire works.

Mom, the food and the TV!

In case the question occurs, we had shu mai dumplings with dipping sauce and sesame cold slaw.  We also had tea and bubbling wine–Imperial Kir (two big thumbs up).  Here’s how it looked on the plate.

This leads me to the NEW YEAR’S DAY tradition.  Last year I made a version of them called Hoppin’ John.  It was pretty good, but it involved putting the black-eyed peas over rice.  This year I decided to do a variation on that.  I began with the peas.  First, I brought a pound of them frozen to a boil then I took it down to a simmer.  They had to simmer for an hour.  For those who try this later on, the softer you want these peas, the longer they have to simmer.  To these I added chopped crispy bacon, sauteed onions, green chile peppers and garlic.  For those of you who know Cajun cooking, it’s the New Mexico version of the cooking trinity.

While the peas simmered, I made a pan of cornbread. Now, this is a traditional cornbread mixed in the fry pan then baked in a 400 degree oven for twenty minutes.  I used the fry pan for the fun of it.

With peas simmering and cornbread baking, I chopped green onions, cilantro, and one last strip of crispy bacon.  These will go over the peas.

To make the dish uniquely mine, I also made a dish of guacamole.  The recipe is on the blog.  I added this to make the dish what my mother always referred to as balanced.  For a meal she believes you need to have variety in color, flavor, texture and temperature.  She learned this in her Home Economics course in high school.  The guacamole gave me a new temperature and texture.  I also shredded some cheese.  My father used to say that if you added enough cheese to anything, it would taste better.  There’s something to live by.

To assemble all these, I put the peas over the cornbread then top with cheese, onion, cilantro, and bacon.  I put a dollop of guacamole on the side.  Here’s how it looked.

I had two servings!

Okay, so it’s not THAT photogenic.  Though I never really liked black-eyed peas before, this I would have again and again.  As the cap on my New Year’s Day, I went for a walk.  To all those out there who are looking for I reason to love Roswell, I give you Cielo Sunset. 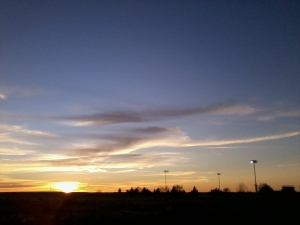 I am a starting publisher who needs the help of younger people to successfully use social networking. I continuously search for good stories and good writers.
View all posts by evamccollaum →
This entry was posted in Uncategorized and tagged Balanced meal, Black-eyed peas, New Year's Day, New Year's Eve. Bookmark the permalink.

1 Response to A Clumsy Start