Looking down on all of Hell!

This ends the umpty-umth time I’ve been involved in building Dante’s Inferno as a class activity.  My Sophomore Dynasty at Narnia tonight managed to bring togehter a nearly complete sculptural rendering of the first part of the Commedia.  I will now provide pictures.  They are a rough cut, and that means it’s essential to ignore the incrediby messy background.  So, here it is.

Dig the Dante in the Lobby!

Here is the lobby and the first circle combined.  That’s Limbo in the background with all the trees.

Here sit’s Minos at the entry at the circle of the Carnal.

Notice the big fan blades that symbolize the wind that blows the lusty.  The couple tied together are Francesca and Paulo (poor little things).

Here lie the gluttonous guarded by the legendary three-headed dog.

Check out the allusion to a current celebrity.

That’s right!  The guy with the hair is Donald Trump.

The Wrathful and the Gloomy

They are SO TINY and so detailed.  Try to make out the teeny, tiny angry guy trying to get in the boat. 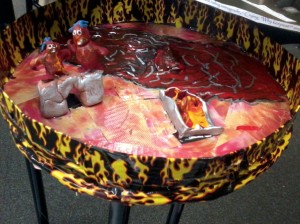 The City of DIs

Look how they made the DUCT TAPE work.  Now, that’s something that could surprise a reader.

The Minotaur is SO GOOD!  Here he stands on the shore of the river of blood guarding those violent against others.

In this rendition, those who are violent against themselves are extra silvery.

It would look much bigger if that one figure didn’t have such a BIG HEAD. 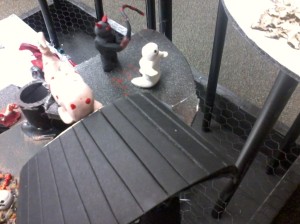 Geryon at the First Bolgia

The eighth circle shows the most charming little demon whipping one of the seducers.

Here the flatterers suffer in some technicolor caca.

The simonists have their feet on fire and are stuck down head first. 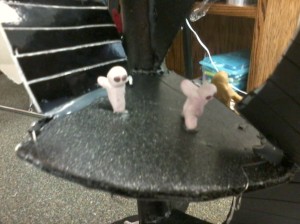 Here the diviners run with their heads twisted backwards.

Here the image does not do justice to the tiny Malebranche torturing the corrupt politicians.

Here the hippocrite stumble covered in gold looking coats made of lead. 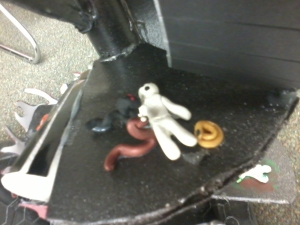 The theives are tortured with SNAKES!  Why’d it have to be snakes? 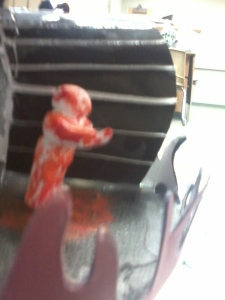 Here the evil councilors are trapped in tongues of flame. 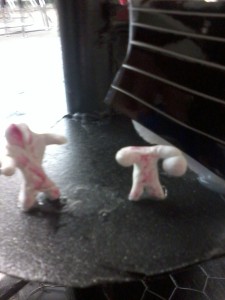 One of the schismatics is forced to carry his head around under his arm.  Tisk.

This counterfieter or forger or alchemist has a terrible skin condition.

“Lo, Dis.”  Yep.  There he stands, the King Demon himself gorging eternally on Judas, Cassius, and Brutus.  Who are those little elves standing so near?

Looking up, it has an impressive charisma all its own.  Thank you, Peeps!  You did well.

I am a starting publisher who needs the help of younger people to successfully use social networking. I continuously search for good stories and good writers.
View all posts by evamccollaum →
This entry was posted in Uncategorized and tagged dante s inferno, donald trump, fan blades, gaming, river of blood. Bookmark the permalink.

1 Response to Building Hell: A New Way to Study