Food in Roswell: A Tribute to Jenny Currier (Foody)

So…my last entry has far too much self pity and angst in it.  I appreciate all the uncommonly kind comments former and current students sent.  God bless you all.  One of these people is (of course) Jenny Currier, who got me started blogging, and I hate to let her down, so I’ve come up with a new blogging feature.  I’m even going to add a tab to my page for it.  I’m going to review food and products available in Roswell, America.  (Just so I’m clear, Roswell, America is in southern New Mexico, not Georgia.  We all know that, right?)  This is also a way for my family and I to share experiences we have had that have been fun and satisfying.  As a celebration of my mother’s 65th wedding anniversary, we took her to her favorite restaurant in Roswell–Popo’s!

I hear what all you long-time Roswell residents are thinking.  “Popo’s?  You take your mother to Popo’s for her anniversary?  How cheap are you?” 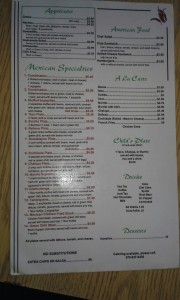 Notice the contact number and the prices. Forgive the glare.

First, Popo’s food is always tasty, though I have never tried their “American Food.”   The Mexican food is flavorful without burning one’s mouth with too much spice.  And, it offers an “A la Carte” option, which is one of the big reasons Mother likes it.  She orders the single enchilada, red, and a sopapilla.  She does not want a side of beans or rice, and when she and one of her octogenarian friends joins her, they like to brag that can eat for less than a “sawbuck.”   I have tasted nearly all of their specialties, but my favorite is the stuffed sopapilla.  If I’m feeling guilty about my weight (which I almost always am) I get the half order, and it comes to the table hot and satisfies me well.  The Guadalajara is also yummy.  My nephew likes the combination plates, and even though they are the top end of the menu, they are still marvelously inexpensive.  All three of us ate and had a sopapilla for dessert for less than $20, which I consider remarkable.  The servers are always pleasant and efficient without being obtrusive. 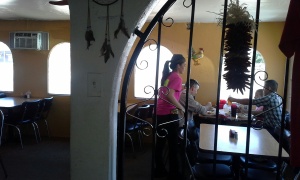 The walls ARE newly painted.

Popo’s does not serve alcohol.  It’s essentially a pretty Puritanical little place on the corner of McGaffey and Grand.  Check out the tee-shirt they have behind the register where you go to pay for your meal.

It explains they wear red on Fridays to honor the troops.

Orson (my nephew) and I decided we would give it an eight out of ten.  It loses points on only one front–ambiance.  It is in an ancient building with uneven floors, doors that don’t always close quickly, and windows which show little pockmarks from (I suspect) late-night gunfire in days long past.  (Don’t worry.  There’s no gunfire during business hours.)  Some people might assume it isn’t clean, but I have a test for that which I have never known to fail.  I don’t use a straw.  When I sip from the glass, I get the mildest hint of dishwasher soap.  By the second sip it is gone, but that little twang always serves to show that the kitchen, though in a building that might worry one, is up to snuff in the cleanliness department.

I am a starting publisher who needs the help of younger people to successfully use social networking. I continuously search for good stories and good writers.
View all posts by evamccollaum →
This entry was posted in Uncategorized and tagged Inexpensive food in Roswell, Mexican Food in Roswell, Popo's in Roswell. Bookmark the permalink.

1 Response to Food in Roswell: A Tribute to Jenny Currier (Foody)